All of our open-ended Clear Plastic Fish Bags are made from 100% virgin low-density polyethylene and meet all USDA and FDA requirements. Plastic fish bags are loose packed in boxes of 1,000 unless otherwise noted. Our poly fish bags can be bottom sealed or side sealed. We also offer custom size and custom printing on all of our plastic bags. Plastic fish bags are measured width first and length second for example 8" wide x 10" long. The sizes are from side to side and bottom seal to the open top but can vary due to manufacturing tolerances of up to 1/4 inch on each dimension.  Larger sizes (24” and above) are almost always bottom sealed.  Now you're ready to choose your bag thickness (mil).

Transporting fish is a very important part of fish culture. Fry and fingerlings must be transported from hatchery to pond for stocking. Brood fish are sometimes transported into the hatchery to spawn.

It may even be necessary to transport live harvested fish to the market for sale. Many methods for fish transport have been developed. Several of these methods are described here.

Fish are generally transported in containers such as cans of different sizes, pots of ceramic or metal, wooden or metal buckets, vats, barrels, plastic bags, styrofoam boxes, bottles, jugs, animal skins and bamboo sections. In fact, almost any clean, waterproof container may be used. Certain containers provide good insulation from heat, for example, wood or styrofoam. Containers like metal or plastic are poor insulators and may have to be wrapped with wet towels or packed with ice to keep temperatures down.

Once fish have been placed in their transport container they are brought to their destination by the quickest possible means that will provide a relatively smooth and direct route. This may be by foot, animal cart, bicycle, boat, motorized land vehicle, train or plane.

Fish transport must be done carefully in order to be successful. A poorly organized effort may easily result in death of fish. The following factors directly influence fish transport.

A famous saying in fish culture is that "fish are not potatoes". They need tender loving care if they are to remain strong and healthy. Tolerance of fish to transport is related to their ability to resist or adapt to stressful conditions. Their resistance also changes as they pass through various life stages. Larvae are very delicate as are brood fish which are ready to lay eggs. The table below indicates stress tolerance levels of some commonly cultured fish.

Presence of food in the intestines.

Fish survive transport better if they have no food in their intestines. For this reason, they are not fed for 1 to 2 full days prior to the time they will be transported. Brood stock are often conditioned for transport to spawning facilities by crowding them up in a seine net and releasing them. This procedure is done for 2 consecutive days before moving them from their pond to the hatchery for spawning. The fish stop eating and this helps them adapt to the stress of artificial spawning.

Fish can also be harvested and held in net enclosures or tanks for 24 to 48 hours with clean, preferably gently running, water. The fish pass food out of their intestines and will be in good condition for transport. If the fish have disease or parasites they can also be treated easily in tanks prior to transport. 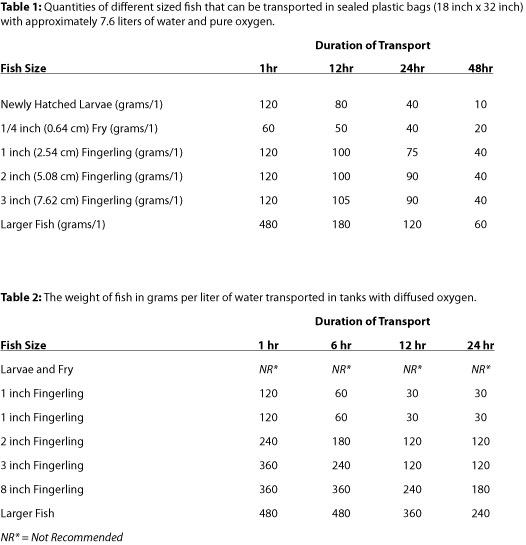 Age and size of fish.

A lower weight of small fish can be transported per unit volume of water than large fish. This guide classifies fish broadly into four main groups according to what life cycle stage they are in. Newly hatched fish are called larvae or sac fry. They are slow-moving and possess a yolk sac which provides them with at least a 24 hour food supply after hatching.

Post larvae do not have a yolk sac and are commonly called fry. Fry weigh less than 1 g. A 3 to 4 week old fish weighing more than 1 g may be called a fingerling. Sexually mature fish are often called brood stock. Table 1 provides a "rule-of-thumb" guide to determine how many fish of a given age group may be transported. These figures are based on transporting fish in sealed plastic bags containing oxygen and about 8 liters of clean water at approximately 18oC.

These numbers are only a rough guide and may not work under all conditions or for all kinds of fish. Tanks or containers must be used to transport fish if plastic bags are not available. Table 2 gives recommendations for transporting different sized fish in tanks with diffused oxygen at approximately 18 degrees C.

It is essential to maintain adequate oxygen in the water while transporting fish. The technique recommended for oxygenating water during fish transport is the use of pure bottled oxygen. It may be bubbled continuously into an unsealed container during transport, or injected into a plastic bag containing water and fish which is then sealed air-tight for transport.

When plastic bags are used, oxygen is added after water and fish. One-fourth of the bag usually contains water and fish and three-fourths contains oxygen. After adding oxygen the bag is sealed shut with a twisted rubber band, string or other material. As a precaution against leakage, the first plastic bag should be placed inside a second bag whenever possible. The sealed double bag of fish is then placed in a box, woven grass bag or other container for added protection and loaded onto a vehicle for transport. If properly packaged and insulated from heat, these containers can transport fish for 24 to 48 hours without water exchange. The following figures illustrate the use of plastic bags and bottled oxygen in fish transport.