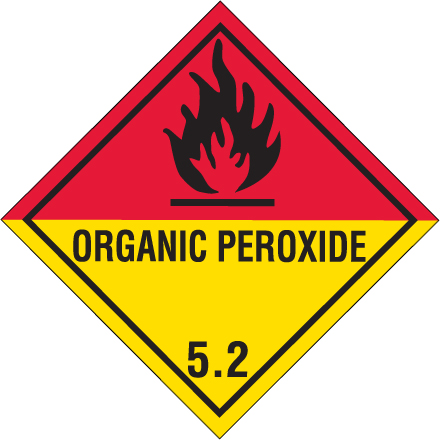 This D.O.T. Organic Peroxide paper label clearly identifies potential hazards like polyester and silicone wich is used in making fiberglass in a familiar design. This 4 inch x 4 inch, Department of Transportaion shipping label conveys hazard information for containers or shipments of hazardous materials. The black text and "Burining "O" graphic on top of the yellow background cleary states "ORGANIC PEROXIDE 5.2". Flexible llabel stock with permanent adhesive. Printed with UV-stable ink and issuitable for indoor or outdoor use at service temperatures from -40 F to +180 F.

Organic peroxides are organic compounds containing the peroxide functional group (ROOR'). If the R' is hydrogen, the compound is called an organic hydroperoxide. Peresters have general structure RC(O)OOR. The O-O bond easily breaks and forms free radicals of the form RO. Thus, organic peroxides are useful as initiators for some types of polymerisation, such as the epoxy resins used in glass-reinforced plastics. MEKP and benzoyl peroxide are commonly used for this purpose. However, the same property also means that organic peroxides can either intentionally or unintentionally  initiate explosive polymerisation in materials with unsaturated chemical bonds, and this process has been used in explosives. Organic peroxides, like their inorganic counterparts, are powerful bleaching agents.

Link for the Electronic Code of Federal Regulations for Non-Flammable D.O.T. Label

An organic peroxide is any organic compound containing oxygen (O) in the bivalent -O-O- structure and which may be considered a derivative of hydrogen peroxide, where one or more of the hydrogen atoms have been replaced by organic radicals, unless any of the following paragraphs applies:

Methyl ethyl ketone peroxide, benzoyl peroxide and to a smaller degree acetone peroxide are used as initiators for radical polymerization of some resins, e.g. polyester and silicone, often encountered when making fiberglass.

In the synthesis of organic compounds
Many organic compounds are prepared using peroxides, most famously epoxides from alkenes. Tert-butyl hydroperoxide (TBHP) is an organic-soluble oxidant employed in a variety of metal-catalyzed oxidations, such as the Halcon process (to give propylene oxide) and the Sharpless epoxidation.

Explosives
Acetone peroxide is an ingredient in explosive for paramilitaries because of its ease of manufacture, despite its instability. It is notorious for its susceptibility to heat, friction, and shock.[3] HMTD is another widely-known explosive organic peroxide.